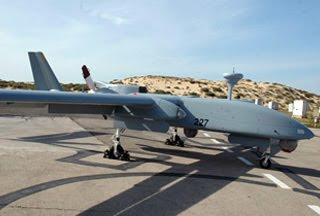 Turkey has cited Israel's delay in the delivery of unmanned aerial vehicles (UAVs) to the country as the main reason behind the cancellation of an international air force exercise.

The Heron UAV drone is capable of flying at an altitude of 30,000 feet for 30 hours. IAF photo

The revelation comes in contrast with earlier Israeli reports that Ankara banned the Israeli Air Force from participating in a joint military maneuver scheduled by the US, NATO, Italy, Israel and Turkey for later this month in protest at Tel Aviv's military offensive in Gaza.

Israel's all-out strike on the Gaza Strip at the turn of the year resulted in the loss of thousands of Palestinian lives, many of them civilian, and brought about international condemnation for Tel Aviv.

However, a Turkish air force official denied the allegations on Wednesday, saying that there were no political motives behind the cancellation of the international air force exercise and that Tel Aviv should not draw a political meaning and conclusion from the postponement.

"Turkey needs those vehicles (the Israeli-made surveillance drones, known as Herons) in its fight against terror. What led to the recent crisis between Turkey and Israel was the delay in the delivery," Today's Zaman quoted the unnamed official as saying.

Turkey and Israel signed a multi-million dollar military deal four years ago, under which Israeli Aerospace Industries (IAI) and Elbit Systems, Ltd. were obliged to equip the Turkish military with ten surveillance drones by October 2009.

According to Turkish officials, Israel's failure to meet the deadline resulted in the cancellation of the annual drills.

Turkey has so far received two Heron UAVs from Israel, but the military has not accepted them due to persistent problems occurring in the strengthening of their engines.
Posted by abe ma6 - anakmatlesen at 3:21 PM